What’s more – why is it widely considered to be THE most effective way to train dogs? In this article, we’ll take a closer look at positive reinforcement and how it can be used to effectively train your dog!

Interested in a career as a professional dog trainer? Learn how to become one in 5 easy steps!

What Is Positive Reinforcement Training?

Positive reinforcement training is a type of operant conditioning. It centers around rewarding your dog for good behavior in order to make him more likely to do that behavior again.

This is different from negative reinforcement, which is when you punish your dog for bad behavior in order to make him less likely to do it again. Most professional dog trainers and veterinarians discourage negative reinforcement training. The reason being, because it can often lead to fear and aggression in dogs.

How Does It Work?

So, how does positive reinforcement actually work? Let’s say you’re trying to teach your dog to sit. You’d start by asking him to sit – and if he does, you immediately reward him with a treat or verbal praise.

What you’re doing here is teaching your dog that sitting equals good things (treats or praise). Therefore, the next time you ask him to sit, he’s more likely to do it because he knows he’ll be rewarded.

It’s important to note that timing is crucial when using positive reinforcement! The reward must come immediately after the desired behavior is displayed. If the reward is too delayed, your dog won’t make the connection.

Do Dogs Learn Better with Positive or Negative Reinforcement?

There are a few reasons for this. First, as we mentioned earlier, negative reinforcement can often lead to fear and aggression in dogs. Second, positive reinforcement is more effective at getting results. And third, it’s simply more humane.

Now, there are some who may argue that negative reinforcement does have its place, and that it can be useful in certain situations. Whether or not this is true is subjective, and we personally won’t advocate for it. But overall, positive reinforcement is the preferred method of training dogs.

That said, we do believe that aversive training – namely, when paired with positive reinforcement – can be beneficial for a dog’s learning experience. The main difference between the aversive method and negative reinforcement is that the former uses corrective measures that do NOT ever result in pain, while the latter relies heavily on punishment that causes discomfort or pain.

For example, let’s say you’re trying to teach your dog to sit. Obviously, whenever he does as commanded, you’ll use positive reinforcement and reward that behavior. But what if he isn’t making the connection that what you want is for him to lower his butt to the ground?

The aversive method would involve adding a corrective measure. A common example in this particularly scenario would be gently pushing the dog’s butt onto the ground as you speak the “Sit” command, and then holding it there for a moment. While the dog may be uncomfortable for a second (as dog’s don’t typically enjoy being held down), they won’t be in any pain and won’t experience distress.

The goal here is to pair the corrective measure with positive reinforcement so that the dog associates the two. Over time, he’ll learn that when you give the “Sit” command, he needs to sit down – and he’ll be rewarded for doing so.

Next, what are some common examples of positive reinforcement in dog training? When it comes to rewarding your dog, you can use either food or praise – or both!

Some of the most common food rewards include:

And some examples of verbal praise include:

Remember, the key is to use whatever motivates your dog the most. If he’s food-motivated, then use treats as rewards. But if he responds better to verbal praise, then stick to that.

One of the great things about positive reinforcement is that it’s highly customizable. You can use whatever works best for you and your dog – as long as it’s something he enjoys and finds motivating.

Incorporating a Clicker into Training

You may have also heard of something called a clicker – and wondered how it fits into positive reinforcement training. A clicker is a small, handheld device that makes a clicking noise when pressed.

Some dog owners choose to use a clicker in addition to treats or verbal praise as a way to reinforce desired behaviors. Here’s how it works:

Let’s say you’re teaching your dog to sit. You’d start by asking him to sit. The moment he does, you press the clicker and immediately give him a treat.

Over time, your dog will learn that the click sound equals a treat – even if there’s a slight delay between the two. This can be helpful if you’re in a situation where treats are not readily available (e.g., on a walk).

Did you know that a clicker is one of the most useful tools in a professional dog trainer’s arsenal? Here are 29 more must-have tools in the dog training world! 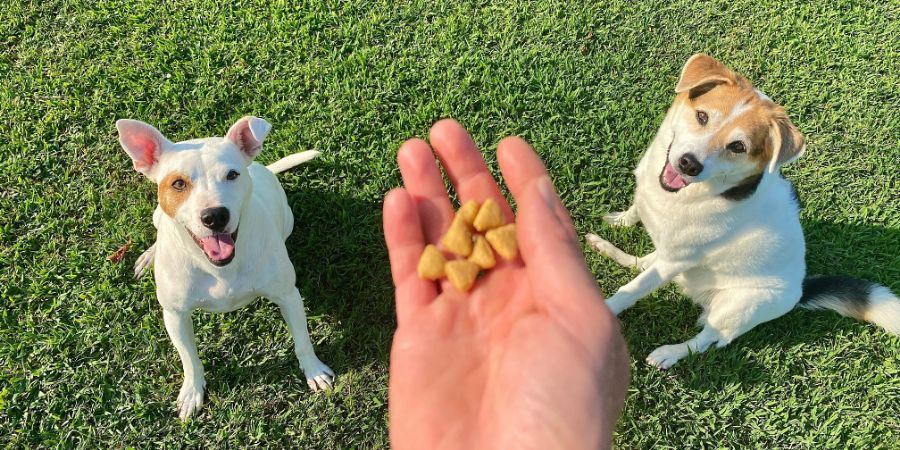 When Should You Use Positive Reinforcement?

Now that we’ve gone over what positive reinforcement is and how it works, let’s talk about when you should use it.

The short answer is: anytime you want your dog to do something!

Positive reinforcement can be used to teach your dog basic obedience commands like sit, stay, lie down, come, and heel. It can also be used to teach him more advanced tricks and behaviors – even things like rolling over or playing dead.

Can You Train a Dog With ONLY Positive Reinforcement?

If you’re not sure whether positive reinforcement is right for your dog, consult with a professional trainer. They can assess your dog’s individual needs and help you create a training plan that’s tailored specifically for him.

How Do You Discipline a Dog with Positive Reinforcement?

At first glance, this might seem like an oxymoron. After all, the act of disciplining a dog sounds inherently negative – which kind of goes against the whole “positive” in “positive reinforcement”… Right?

However, yes, there is a way to discipline your dog while still training them with the positive reinforcement method. The key is to remember that discipline and punishment are two very different things.

Firstly, punishments typically refers to something bad that will cause pain or harm to the dog. Examples of this include physical violence, scolding, or using shock collars.

On the other hand, discipline simply means correcting your dog’s behavior in a way that is non-violent and non-harmful. This could involve verbal commands (e.g., “no,” “stop,” or “leave it”), hand signals, or even just a stern look.

Do Dogs Understand When They Are Being Punished?

Again, we need to differentiate between punishment and discipline here.

When a dog is being punished, they are more than likely having pain inflicted upon them. In the moment, many dogs will not understand why they’re being punished – which means they won’t make the connection between the undesired behavior they exhibited and the fact that you’re trying to break them of that habit.

Instead, they’ll just know that they’re in pain and that you’re the one causing it. This is why punishing a dog typically doesn’t have the desired effect of correcting their behavior. In fact, it often has the opposite effect… Causing dogs to become scared, anxious, or aggressive.

On the other hand, dogs can and do learn to understand discipline and what it means. For example, if you use a verbal command like “no” or “stop” while your dog is in the middle of doing something they’re not supposed to be doing, they will likely understand that they are being disciplined.

As long as you’re consistent with your commands and follow through with non-violent discipline (e.g., verbal commands, hand signals, or a stern look), your dog will eventually learn what you expect from them and behave accordingly.

What Can You Do Instead Of Yelling at Your Dog?

At first glance, this might seem like an oxymoron. After all, the act of disciplining a dog sounds inherently negative – which kind of goes against the whole “positive” in “positive reinforcement”… Right?

However, yes, there is a way to discipline your dog while still training them with the positive reinforcement method. The key is to remember that discipline and punishment are two very different things.

Firstly, punishments typically refers to something bad that will cause pain or harm to the dog. Examples of this include physical violence, scolding, or using shock collars.

On the other hand, discipline simply means correcting your dog’s behavior in a way that is non-violent and non-harmful. This could involve verbal commands (e.g., “no,” “stop,” or “leave it”), hand signals, or even just a stern look.

How to Get Started with Positive Reinforcement

Ready to get started with positive reinforcement? Here are a few tips:

As we mentioned earlier, the whole point of positive reinforcement is to reward your dog for good behavior. So, it’s important to choose rewards that your dog will actually enjoy and find motivating.

Some popular rewards include treats, toys, petting, and verbal praise. Experiment with different rewards to see what works best for your dog.

Instead, try to reward them for sitting whenever possible – whether that’s inside or outside, during training sessions or in everyday life. The more consistent you are, the more quickly your dog will learn.

Training takes time and patience. There will be setbacks and challenges along the way – but don’t give up! If you’re consistent with your training and rewards, you’ll eventually see the desired results.

If you’re having trouble getting started with positive reinforcement or discipline, consult with a professional trainer for guidance. They can help you create a training plan that’s tailored to your dog’s individual needs and give you tips on how to effectively use positive reinforcement.

Punishing your dog is not only ineffective – it can also damage your relationship with them. If you’re looking for a more effective way to train your dog, try using positive reinforcement instead. With time and patience, you can teach your dog just about anything – without resorting to punishment.

Alternately, Why Not Become a Professional Dog Trainer Yourself?

If you’re reading this article, we assume you’re at least somewhat interested in dog training. So, why not take your interest to the next level and become a professional dog trainer yourself? It’s a great way to make a living while doing something you love. Plus, you’ll get to help others build strong, healthy relationships with their dogs as well.

QC Pet Studies offers a self-paced, online Dog Training certification course that can be completed right from the comfort of home! In as little as 3-6 short months, you’ll learn EVERYTHING you need to know to not only launch a successful career as a dog trainer – but also run your very own business, too!

And the best part?

When you graduate, you’ll receive our globally-recognized International Dog Training Professional™ (IDTP™) certification + designation! Not only will this look amazing on your resume and marketing materials; it’ll guarantee you more clients, bookings, and profits! 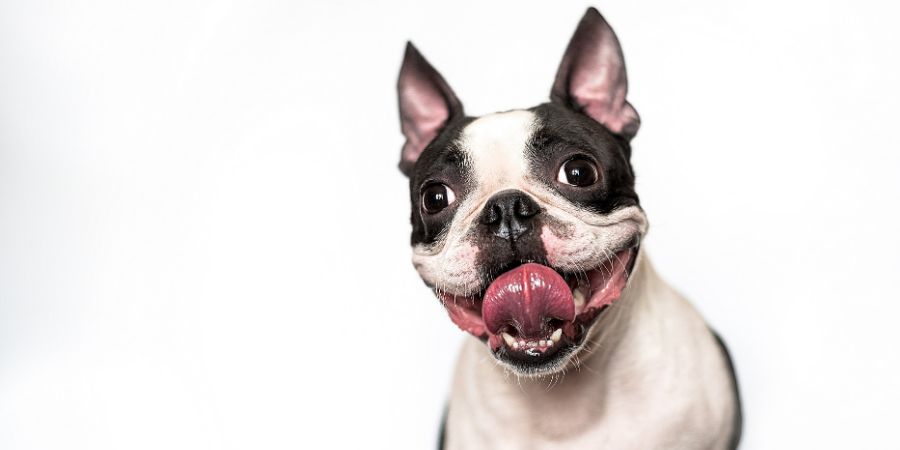 We hope this article has given you a crash course on positive reinforcement in dog training – and why it’s widely considered to be the most effective method to train dogs.

Got any questions or comments about positive reinforcement in dog training?

We’d love to hear from you! Leave us a comment below, and we’ll get back to you as soon as possible. Thanks for reading! 🙂

Start your journey to becoming a professional dog trainer by enrolling with QC Pet Studies today!