Why “Flooding” Can Hurt Your Pet Grooming Business

Imagine: you’re locked in a room with the one thing that scares you most. Your fight-of-flight instinct has kicked in, your anxiety is through the roof, and all you naturally want is to get out of there. Except you don’t have the key for the door, and you have no way of knowing when you’ll be let out. All you can do is stay there, while that thing that terrifies you inches closer, and put up with it.

Doesn’t sound very pleasant, does it? If anything, this sounds like a total nightmare.

Believe it or not, this thought experiment forms the basic idea of what’s known as “flooding”. Flooding is a “technique” used by some to essentially try and cure a frightened dog. Notice how I put the word technique into quotations. That’s very much intentional.

As you’re about to see, respectable dog groomers (and even just people in general) consider flooding to be a legitimate training “technique” about as much as they’d consider kicking a disobedient dog to be one, too. That is to say, it’s not a proper technique at all.

In reality, flooding can be a very dangerous practice. It not only puts the dog itself at risk, it also poses a threat to other dogs nearby, other people, and even you!

So, if you’re a certified dog groomer, heed our warning. Never implement flooding as a practice within your pet grooming business. It could wind up destroying your entire reputation. 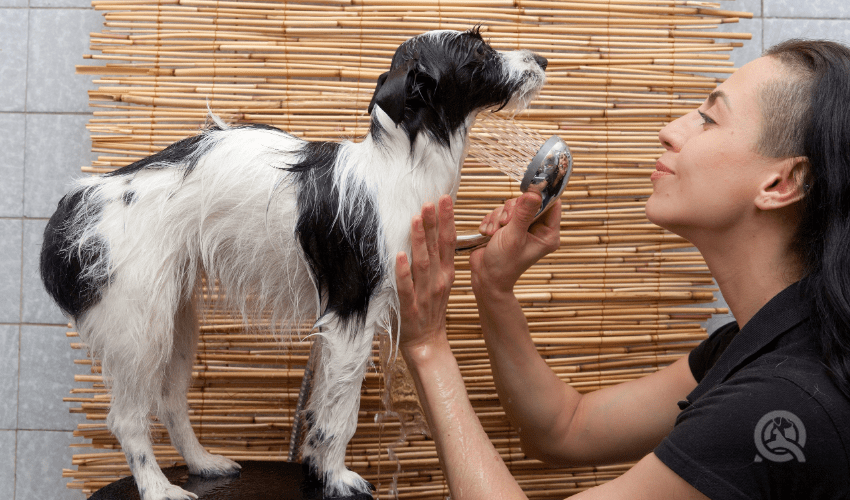 We looked at an example above, but let’s get a little more literal. Sometimes, you’re going to encounter clients who bring a difficult dog for you to groom. When I say difficult, I mean that for whatever reason, they’re not entirely willing to be there.

They may have anxiety, be frightened, or show aggression. For certain dogs, the main trigger for these negative emotions could be having clippers used on them. Maybe they weren’t desensitized to the clippers when they were a puppy. Maybe a prior incident caused an injury and they now have a phobia of the clippers.

Whatever the reason is, they’re now on edge, and their state might make it hard for you to properly groom them. So, what do you do?

The uneducated groomer might choose to enact the concept of flooding at this point. The idea behind flooding is that you take a dog who’s afraid of clippers, and literally clip them nonstop regardless of their reaction. Such a stressful situation will result in the dog’s senses becoming flooded (hence the term).

Once time has passed and nothing bad has happened, the scared dog will come to realize that the thing they fear (i.e. clippers) doesn’t actually pose them any harm. Therefore, they can relax, submit to their surroundings, and function optimally in that environment now.

This is the theory, anyway. In a perfect world, flooding might make sense. The thing is, in the REAL world, it doesn’t work like that. When a dog “submits” when being flooded, what’s actually happening is that they’ve just completely shut down. A flooded dog is incapable of learning. At best, the dog will “shut down” during that session and will have a worse reaction to the clippers on the next groom.

Unfortunately, the consequences of flooding can often be severe. 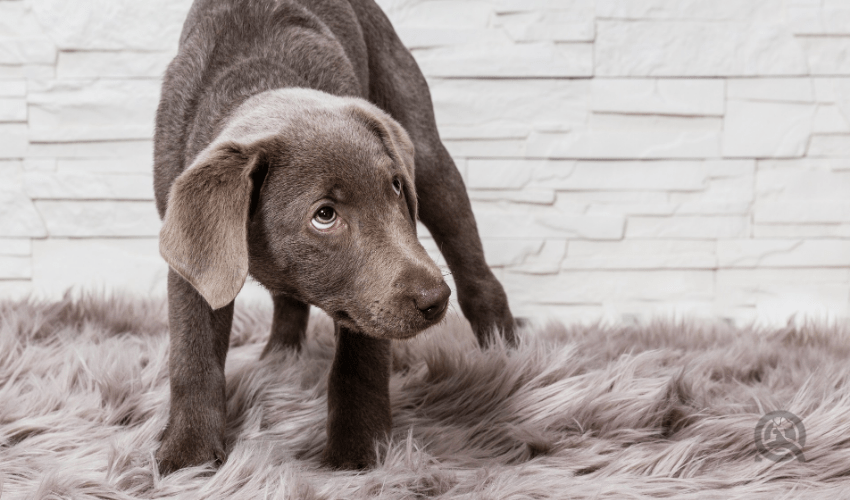 The Consequences of Flooding

Have you ever heard the saying that if you put any dog in a corner, no matter if he’s vicious or not, he’s going to bite back?

This is one of the primary concerns when it comes to flooding, but it’s far from the only danger.

Here are just some of questions you need to consider in the “scared of clippers” example above:

These are all viable concerns when it comes to the idea of flooding. They’ve happened before, and they’ll happen again. As this is the industry you’ve chosen to devote your career to, we’re willing to bet that the LAST thing you want is for any of your client’s dogs to be hurt, be it physically or even psychologically.

Not to mention that if ANY of these outcomes were to come to fruition, this can ruin your pet grooming business and professional reputation beyond repair. 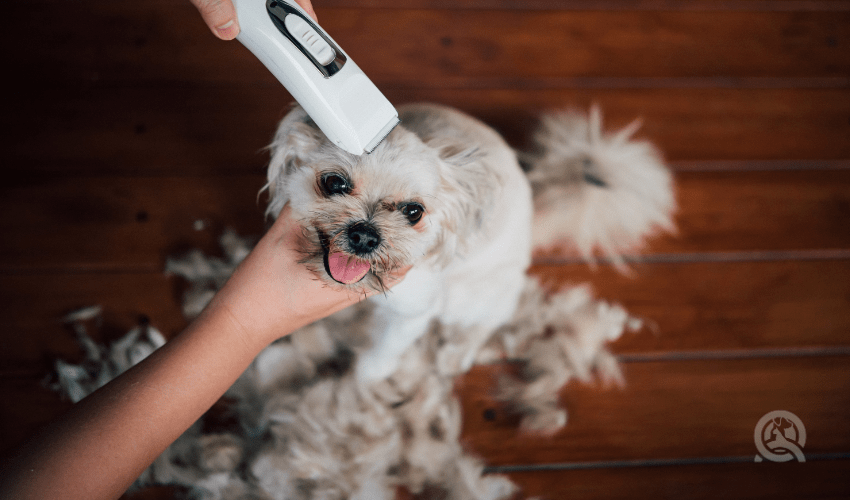 For starters, any injuries as a result of your decision to implement flooding could result in a potential lawsuit. Beyond that, though, you’re demonstrating a lack of education. You’d be essentially showing your clients that you don’t properly understand dog behavior, nor do you know the proper ways to address it.

Worse yet, they’d walk away with the belief that they can’t trust you to put their dog’s safety and needs first. This is the kind of impression that’s likely to spread like wildfire – and it makes sense. After all, would YOU want to put the life of your furry best friend in the hands of someone who’s proven themselves capable of such negligence?

Let’s circle back to the original issue. If your client brings in a dog who’s triggered by the clippers and their emotional state makes grooming impossible, something will still need to be done. If not flooding, then what?

Luckily, there are plenty of other options available to you. For starters, you can rely on your dog behavior and temperament training that your accredited dog grooming course would have provided you. By being able to spot the right signs and signals, you can act immediately and find healthy ways to help defuse any negative situations before they even occur.

You can also communicate the dog’s needs with your client. As the industry expert, you can provide helpful guidance, tips, and general advice for things they can look further into once back at home. For instance, you can stress the importance and effectiveness of positive reinforcement training.

Depending on the severity of the dog’s trauma and/or behavior, rehabilitation under the guidance of trained professionals may be a possible recommendation, too. Most clients will be thrilled for this guidance and will happily participate in helping you help their dog!

These are all just examples, of course. The right approach will depend on the dog and their owner. The longer you’re around the dog, the better your understanding of him will be. You may not know the right course of action the first moment you meet him, but you’ll likely be much more informed by the end of the very first grooming session! 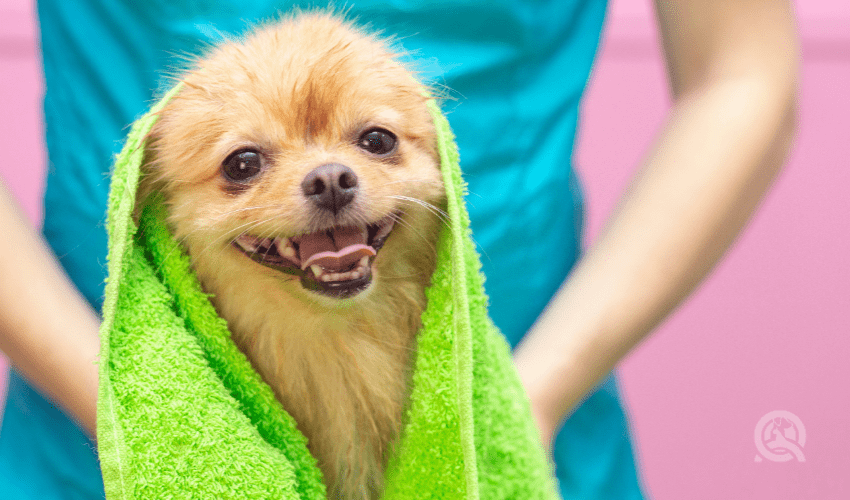 Haven’t earned your dog groomer certification yet? Enroll today in QC’s leading online Dog Grooming Course, and be ready to work in as little as 3-6 months!